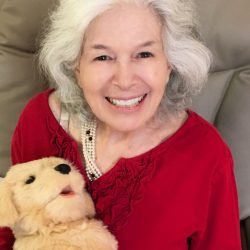 Sunday, December 13, 2020
My most vivid memories of Mom all reflect her signature traits:
Her energy … joy … resilience … contentment … strong will … naughtiness …
rebelliousness … wicked sense of humor … happiness when interacting with people or
teaching someone a new skill … and her proud assertion of her individuality.
Natalie Chekow always stood out in a crowd.
As a child I took that for granted.
As a teenager it humiliated me (like when she affixed multi-colored toy pinwheels –
and bells!-– to the antennas of our family’s 17-year-old car to pick me up from High
School on my birthday).
As an adult and now a parent myself, that unapologetic individuality is one of the
qualities I most admire about her.
She loved being a wife, teacher, mother, and grandmother. She relished being Natalie!
And even when a cruel, unrelenting disease whittled away at her ability to speak or
function in her typical ways, glimmers of her personality were still always present.
Without words she critiqued my outfits with a smile or a stern glare and tug at my
clothes; when denied physical therapy in the hospital, she stubbornly threw her legs over
the metal bar of her bed and followed the P.T. session of the person in the adjoining
space; when suffering from 4 cracked ribs she simply paused to hold her side during her
many hours of walking the halls of the Nursing home.
She still appreciated beauty, and music. She responded to photos, a pop-up book of
butterflies and beautiful imagery. She could become transfixed by an artful tattoo. And
would dance – shaking her “tushy” – given any opportunity.
I’m grateful for the memories of Mom reading to both of her grandchildren; carefully
selecting the cherished plastic silver trumpet for David when he was a toddler; and then
dancing with joy and abandon at Talia’s Bat Mitzvah just a few years ago.
Everyone who knew Mom will miss her.
Natalie Chekow was unique.
She was wonderful. She was caring. She was a “tough cookie.” And she was loved.

Sunday, December 13, 2020
It’s customary for family members to say a few words at a funeral
service. The convention is to offer a eulogy. Extolling someone’s virtues.
What I have to offer is different. Instead, it’s to share a personal story. A
unique one about the shaky start to a love story and a romance which
lasted for more than half a century.
I first met Natalie Hessel when she was thirteen and I was fifteen. We
lived a few blocks from one another in the East Bronx. I didn’t know her,
except from the neighborhood by sight. By chance, I took her photo when
we were each visiting the Bronx Zoo. And, I kept that photo in my wallet for
several years. There was something about her. A dare in your face kind of
smile which I felt the photo caught and I was smitten from the start.
For the most part I’d see her on the subway train returning home from
Manhattan where we each had part time jobs. Working in Department
stores after school.
Several years later I got to the point of asking her for a date. It might have
been excusable for being impulsive but I did something on that first date
which was surely the wrong thing to do. It threw our potential relationship
into a tailspin and took many weeks to get past. What I did was ask her to
marry me on our first date.
She thought my suggestion meant that I was peculiar and wouldn’t risk a
second date with me. It took a lot of talking on the phone to finally get her
to consent to a nominal second date. Which I pitched as benign. Harmless.
A lunch at a place in her neighborhood on a weekday afternoon. When she
ultimately agreed to that lunch I remember thinking at the time “Natalie, it’s
all over for you.”
And, so it was. We got engaged in the Spring of 1959 before I left for the
army. When I returned from my duty as a reservist in September we got
married. Just a few months later. It was the end of January in 1960. We
were happily married from that point on. I’ve lived a long life, done a few
good things and some not so, but by far the best thing I ever did was that
day in 1959 when I convinced Natalie Hessel to let me have a second date,
and ultimately become Natalie Chekow.
More than a half century with a person is a long journey. A person’s
passing is always sad. In this case the sadness is overridden by the
confidence that it’s the right time. Natalie passed away knowing she was
loved by her husband and two daughters who did all they could do for her
and then some until there was no more to do. She brought her fighting spirit
and fought until there was no more fighting to be had. Yes, we’re grieving.
We’re grieving but at the same time we are here grateful that we had
Natalie for all the years of companionship, of joy, and of love that she gave
to us and the memories of being with her that will stay with us. Forever.