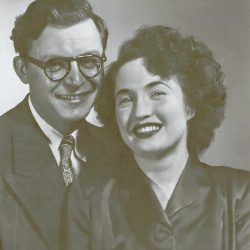 Peg was born in London, England, on May 8, 1921, coming to the United States with her parents Mark and Sadie Rose as a citizen when her father joined the military while traveling in the United States. As a little girl, she lived in Irvington, New Jersey, where she graduated from high school and then studied art. Later after her children were grown, she returned to obtain a degree at The State University of New York College at Brockport in English and Women’s Studies. Peg is predeceased by her husband, Stanley Toker (originally of Elizabeth, New Jersey). Peg recently told her daughter that she was taught to dance by her Aunt Ada, which lead years later to helping out at a dance event. There she met Stan, who spent the evening trying to have a dance with her. Soon after, they were planning to be married, and with post-WWII housing shortages, moved in with her in-laws Harry and Rae Toker. From her mother-in-law, she learned to cook and developed a close relationship with her sisters-in-law Hazel (Morris), Averill, Estelle (Murray). Peg was born when women were just receiving the right to vote in the US. She was a stay-at-home-mom, a working mom both as a bookkeeper and with her husband running their real estate agency as a managing broker. Peg was involved in community activities serving as president of the local chapters of Hadassah, Business and Professional Women (BPW) clubs, and Parent-Teacher Association (PTA). She organized and used her skills to write plays, winning an award for a dramatic play. Her favorites were parodies of musicals and current events such as Oklahoma!, where the “The Parent and The Teacher Should Be Friends.” This lead to being asked to run for a seat on the Board of Education, a first for a woman. Not only did she get elected, but another woman was also then able to be on the board. Once there, she was ready to work and got involved in major building projects for school additions and construction of a brand new school. Peg and Stan moved to Meriden, Connecticut, living there in the early 1970s and then to Rochester, NY. In Rochester, they started a country store in their house. Eventually, Peg went back to bookkeeping positions and then to a job as a Relocation Specialist with Rochester Urban Renewal/Community Development, which included preparatory work for the current Hyatt Hotel. After retiring, she was active in the Athenaeum (now the Osher Lifelong Learning Institute at RIT), where she lead Reader’s Theatre playreadings. Peg’s daughter Leslie Toker, son-in-law Jeffrey Nidetz and grandson Mark Nidetz Toker, took Peg, who proudly called herself a “Jersey Girl,” back there for a graveside service and burial. In addition, she is survived by a sister Roslyn (Frank) Blou, son Alan Toker, granddaughters Shannon Hoffman, Briana Toker, Sorcha (Dan) Bell, and great-grandchildren Amelia, Calder, Tallulah, and Ella Pearl. As well as her nieces, great-nieces and nephews; and many life-long and recent friends. The family wants to thank friends and care-givers, both locally and out-of-town, who have shown their caring and love to Peg in so many ways. In lieu of flowers, donations in Peg’s memory may be made to organizations that help people, including Mazon: A Jewish Response to Hunger www.mazon.org, The Hebrew Immigrant Aid Society (HIAS) www.hias.org and in Guatemala – El Amor de Patricia Children’s Home www.elamordepatricia.org Shiva will be observed, and visiting is being arranged at Peg’s daughter’s house in Rochester. Please call or email